Pharmacological effects of anti-androgens and other compounds in an

We previously described the effects and behaviour of the main circulating active androgen testosterone (Testo) and its main active intracellular metabolite DHT in an androgen sensitive sebocytes (abstract X, SID, 2019). Testo and DHT readily induce 1) androgen receptor (AR) translocation, 2) expression of target genes and then 3) a lipogenic differentiation program. DHEA is not significantly transformed into Testo, had no significant androgenic (agonist), nor anti-androgenic (antagonist) effect by itself in the tested conditions.
Here we analysed the activity of reference anti-androgens (Finasteride, Dutasteride, Cyproterone acetate), at the level of their potential targets (5-alpha-reductase, AR translocation, induced transcripts) and in a functional lipid accumulation assay. We also evaluated this androgen-induced lipid accumulation assay as a potential pharmacological tool to detect potential inhibitors from both androgenic and non-androgenic origins.

The androgen sensitive sebocytes should allow to characterize both the activity and the mechanism of action of anti-androgen drugs. These anti-androgens may act at the level of androgen metabolism, AR translocation, AR nuclear activity and thus may have (or not) a functional effect on androgen-induced lipogenic differentiation of these cells. If we focus on these functional effects, other (non-androgenic) potential cell metabolism modulators may also work.

[14C]-Testo metabolism was analysed after incubation with cell cultures at different times and extraction, chromatography/phosphorimaging2. RASD1 expression was measured by RT-qPCR1.
AR translocation was followed by immunofluorescence1. Lipid accumulation was evidenced by incubation with the fluorescent probe Bodipy®1. Automated photography and image analysis was performed using an INCell AnalyzerTM 2200 (GE Healthcare). The tested compounds are listed in fig 3.

1 – Effects of Dutasteride, Finasteride and CypAc on [14C]-Testo metabolism (A) and DHT production (B); 24h assay.

– Dutasteride is a strong inhibitor of DHT production (1000-fold more active than Finasteride).

– CypAc strongly inhibits the transcription of AR-dependent genes induced by DHT or Testo, without interfering with AR translocation (nuclear effects).

– CypAc is not as effective as expected on the functional lipid accumulation assay. Dutasteride is active in the lipid accumulation assay even in the presence of DHT as inducer, indicating potential additional targets than 5-α-reductase. Taken together it indicates that there is no direct correlation between early inhibitory processes and the final functional effects after 7 days.

– The androgen lipid accumulation assay is suitable for high throughput testing of various compounds with various mechanisms of action, including anti-androgens, cell metabolism inhibitors, etc. Among other, mTOR inhibitors are effective. In these experimental conditions, isotretinoin, which is a reference treatment for acne does not interfere with this androgen-stimulated lipid accumulation (even shows an opposite effect). 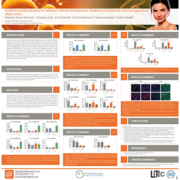 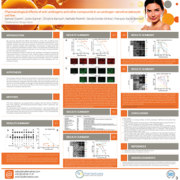 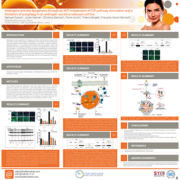 Acne vulgaris is a chronic inflammatory disease of the skin which affects most adolescents and is the cause of over half of all dermatology consultations. This pathology, which is characterized by a hypersecretion of sebum, can be the cause of physical complications and may also lead to psychological distress.

Acne Vulgaris is a chronic inflammatory pathology located in the region of the pilosebaceous follicle. It occurs following a high production of sebum linked to hormonal (androgynous) or environmental (pollution) malfunctioning and to the colonization of the pilosebaceous follicle by certain bacteria (P. acnes).
QIMA Life Sciences has developed a panel of innovative assays to discover and evaluate compounds for the treatment of acne.

The sebaceous gland is an organ located in the dermis. Its role is to synthesise and secrete sebum which is a component of the hydrolipidic film. The purpose of sebum is to protect the skin from external aggression and dehydration. Sebum also maintains the suppleness of the skin and hair. 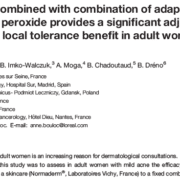 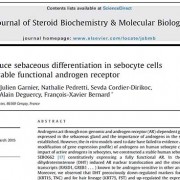 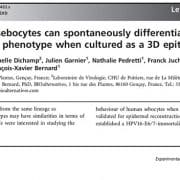 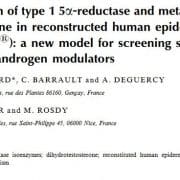