microRNAs (miRNAs) are small non-coding RNAs (about 22 nucleotides) which play a significant role in the post-transcriptional regulation of genes. miRNAs inhibit the expression of their target genes by binding to the 3’UTR (the three prime untranslated region), thus blocking translation and damage. A mature miRNA can target a lot of genes and conversely, one gene can be the target of several miRNAs.

Bioalternatives can assist you in your project, from miRNA extraction to result interpretation, for miRNome expression by microarrays or only for targeted gene expression by RT-qPCR.

miRNome analysis from Affymetrix miRNA4.1 microarray will allow the identification of significantly modulated genes with fold change calculation and statistical tests (t-test performed with replicates), which will detect the characteristic molecular signature of the sample (figure 1). A second step of analysis will identify the target genes of significantly modulated miRNAs, using Qiagen IPA® software (figure 2). 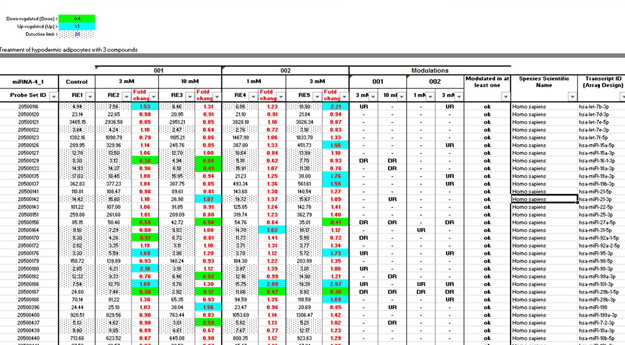 The matrix calculation in this table allows the calculation of fold change values and the detection of significantly modulated miRNAs. 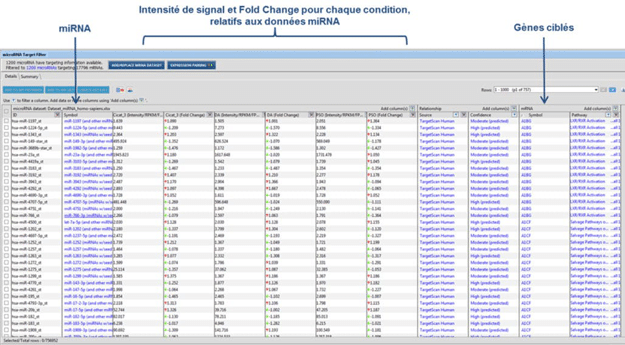 For studies of the regulation mechanism using miRNAs, miRNome analysis may be performed along with a transcriptome analysis, by using a U219 microarray (human microarray) on the same samples. The hybridization of the same sample on two types of microarrays will allow the identification of the significantly modulated genes that are potentially regulated by miRNAs. Correspondence of U219 and miRNA4-1 microarray data is determined by using Qiagen IPA® software (Figure 3).

RT-qPCR experiments analyse and compare the expression level of targeted genes in given conditions. The same method can be used for miRNA analysis.

Bioalternatives can perform the extraction and the analysis of targeted miRNA expression by RT-qPCR. 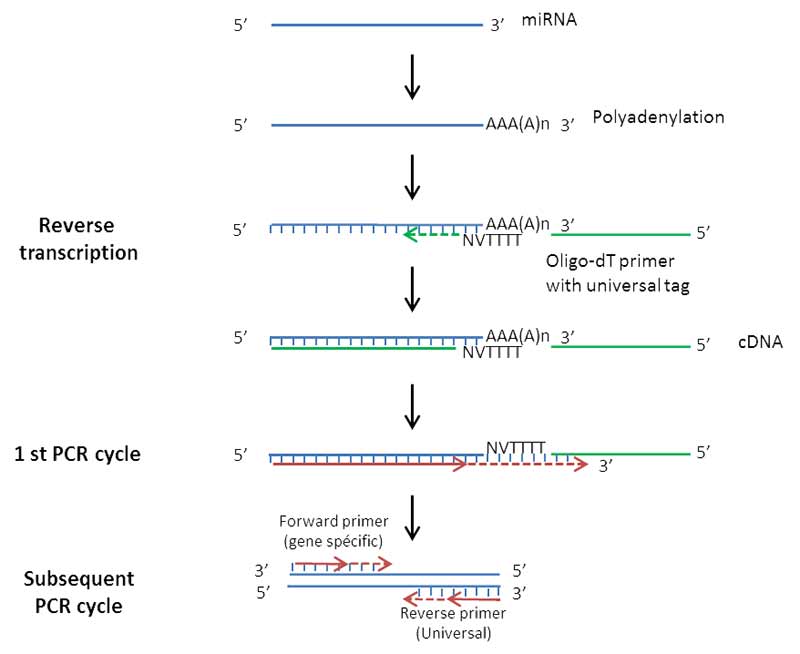 Result analysis is based on a continuous measurement of fluorescent molecule incorporation (SYBR Green) during the amplification process of the PCR reaction.
These measures are transcribed into numerical values (number of cycles) for each gene. These values are then forwarded and processed under Microsoft Excel in order to calculate the relative expression level compared to a control condition (Figure 2).

In Bioalternatives, we have the necessary bioinformatics resources and know-how to help you go further by identifying the target-genes of miRNA of interest.

Do you have a project requiring miRNA analysis? Let’s talk about it!